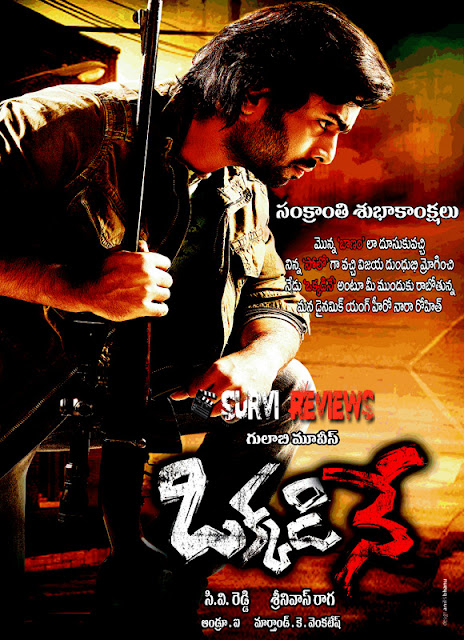 After scoring a hit with Banam & Solo, Nara Rohit is once again back to big-screens with Okkadine film. Srinivas Raga who earlier directed Katha has wielded the megaphone for the movie. Okkadine is a romance-action flick, which is billed as a youthful and family entertainer. The movie expounds love and familial affection with reference to the contemporary living.
Story: Shailaja (Nithya Menen), daughter of Shivaji Rao (Sai Kumar), returns to India after completion of her studies. Shivaji Rao is a well-known person in Media, His only goal is to become Chief Minister. She goes to Vizag for vacation with a friend and here she meets Surya (Nara Rohit) a new IFS officer. Sailaja also meets Surya’s family and feels a completion to her loneliness. She loves Surya and his family.  In between, Sailaja witnesses some killings (Inspector & MLA). Meanwhile, she gets proposed by Surya and she also likes him. She shares this with Sivaji Rao who is preparing to enter politics. But in comes a twist that Sailaja doesn’t expect.
Performances: Nara Rohit is better in this one compared to his earlier film. But again there is some problem with his mannerisms. Nitya Menon has amazing ability of emoting and expressing herself. But her skills were too artificial in this film. Naga Babu is Okay in his role. Sai Kumar is given a raw deal in this film. Chandra Mohan, Sudha, Pavani Reddy and Snigdha cameos are fine. Brahmanandam, Srinivas Reddy are ineffective.
Technicalities: It’s a usual mass story on Telugu screen. It needs bright screenplay to make audience glued to the screen. But director could not shape his script right, which resulted in bad screenplay and uninteresting narration. Director Srinivas Raga has churned out a boring saga that defies logic most of the times. Most of the scenes look unconvincing and certain comic situations which involve Bhramanandam as well will make you flinch. Dialogues by Chintapalli Ramana are mediocre. Photography by Andrew is Okay. Songs scored by Karthik are mediocre. Background music is loud. Even Super Hit Puttintollu Tharimesaru remix track failed to attract. Editing by Marthand K. Venkatesh could have been better.
Survi Verdict: First half of the film is tedious. Second half is draggy. The main drawback of the film is thin story, weak screenplay, direction, dull dialogues and mediocre music. On the whole, Okkadine has nothing new to offer. Skip in theaters.
Survi Rating: 1.5/5
Theatrical Trailer: