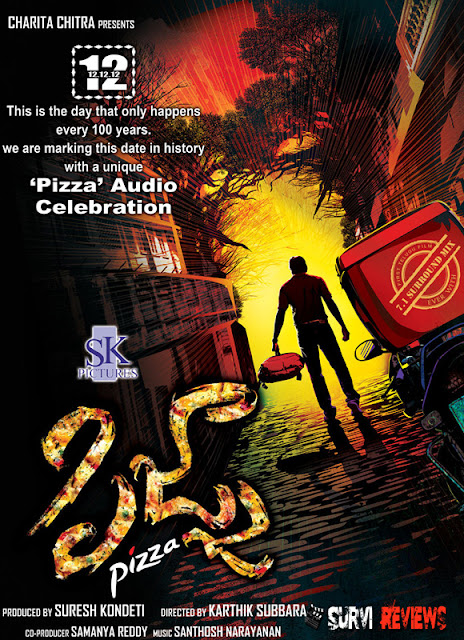 Cast:  Vijay Sethupathi, Remya Nambeesan
Release date: February 15, 2013
Director: Karthick Subburaj
Screenplay: Karthick Subburaj
Music:  Santhosh Narayanan
Producers: Santosham Suresh
Censor Certificate: UA
Runtime: 128 Minutes
Genre: Action – Thriller
Suresh Kondeti after successful Premisthe, Nanna and recent Journey is back with one more promising dubbing movie Pizza, which is a crime thriller. Pizza is the first Telugu film with 7.1 surrounded mix sound effects. This technology is one of its kind and very few has a facility to use this effects.
The film directed by Karthik Subburaj has Vijay Sethupathy and Remya Nambeesan (Thakita Thakita & Tuneega Tuneega fame) in lead roles. Let’s check out the review for more details.
Micheal (Vijay Sethupathy) and Anu (Remya) are orphans and childhood friends. At one point, they decide to move out from the orphanage and live together. Micheal gets a job as a pizza delivery boy while Anu aims of becoming a fictional writer. Life takes an unexpected twist when Anu becomes pregnant forcing Micheal to enter the wedlock. The action begins when Micheal goes to deliver pizza into a haunted house. Which changes his life forever and if you think the twist ends there, wait and watch there is something big waiting.
Vijay Sethupathi literally carries the movie on his shoulders with an effortless performance. His expressions convey a range of emotions and add an authentic touch to the mysterious proceedings. Remya Nambeesan, plays a girl-next-door role with modern approaches and she does her part quite well, aptly assisting Vijay Sethupathi. But the chemistry between the lead pair, lacks the fire. VJ Pooja and the rest of the cast including Aadukalam Naren perform their parts well.
Thrilling opening credits akin to Paranormal Activity, director Karthick Subbaraj sets the mood perfectly. The first half an hour a little indulgent, which takes its time to introduce the viewers, to the characters and their dilemmas. Then builds up a fine amount of anticipation which later paves way for an explosive denouement. The intermission sequence has to be one of the best in South cinema in recent times and leaves the viewer’s twitching in their seats as to what might happen next. Though the story written is simple, but the screenplay was very smartly written by Karthick Subbaraj, which brings a sigh of relief and also grin to the viewers. Climax is a true sucker punch. This is one of those rare intelligent movies which has a very tight script.
Karthick Subbaraj should be applauded for capitalizing the talents of fantastic technicians. Gopi Amarnath‘s cinematography is wonderful. His framing for the romance portions were very subtle in nature, but his real talent was evident during the bungalow scenes. The songs are also in sync with the movie with ‘Enta Parugulata‘ towards the climax being a brilliant rock song. Usage of Violin in the climax is mythic. The background score is very subtle and fresh from Santhosh Narayanan and he efficiently uses the creepy silence factor during the scary portions. Editing by Leo John Paul is crisp and noteworthy. Telugu dubbing is good. Production values are fine.
The film had the right amount of topping [thrills] added with extra-cheese [background-score] served piping hot to the movie-hungry Telugu audience. Karthik Subbaraj, take a bow, what sheer brilliance has been brought out by such a young debut-ant. This is an edge-of-the seat thriller, Folks!! just place your order and prepare to get THRILLED…
Survi Review: 4/5
Theatrical Trailer;