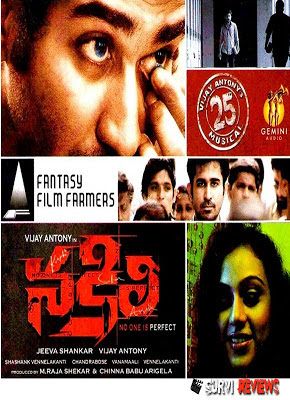 Cast: Vijay Antony, Siddharth Venugopal, Rupa Manjari, Anuya
Director: Jeeva Shankar
Music: Vijay Antony
Producer: Fatima, Vijay Antony
Certificate: UA
Runtime: 145 Minutes
Nakili is a thriller directed by Jeeva Shankar introduces music director Vijay Anthony in the lead role. Incidentally it is also his 25th film as music director. On both these counts Vijay Anthony has delivered well.
Nakili is the life of Karthik who kills his mother and her illegal mate after his father killed himself discovering the infidelity of his wife. A compliant student of a lesser family and having grown up in a restrictive school for the accused, he seeks a new identity and a meaningful life. Bereaved, he changes identity by forging a deceased’s signature; using his credentials, ends up in a medical college in Chennai. He renounces his mother figure and one would think that a woman of his life will spice up some so-called commercial elements into the script, but new comer Jeeva Shankar surprises us, the story doesn’t take any such detour. Salim stays focused in academics, creates goodwill, but soon the society casts its callous bout on him and he defends it by wielding a killing-spree. How with this seemingly impulsive behavior, Salim reaches the finish line makes the rest of the plot.
It’s a tailor made role and you can’t imagine any other actor doing justice to the role. It’s a Vijay Anthony’s grey-ish character all the way. Especially at handling Senior – Dealing duplicate father – Interval – Restaurant scene with Anuya family shows his mark as an actor. But he needs to work on his emotions and expressions in some scenes. Salim’s character suited the mood of Vijay’s face.
After a dumb debut in Ananda Thandavam, Siddharth Venugopal does a good job. He is promising and nearly carries the first half entertainment on his shoulders. Roopa finally gets a meaty role and she does it with poise. Anuya and Vibha does a cameo. Rest of the unknown cast have all done their parts well.
Classic plots never fail unless they are exaggerated. One such classic plot is Stolen Identity. It’s a trick used masterfully over the years by directors whenever they want to make a solid thriller that shoulders a mild psychological tension in the mind of the impostor. Here director inspired by The Talented Mr. Ripley (It even reminds us of Athadu) and developed the script depending on our nativity. Being Jeeva Shankar’s debut film, there may be seen some imperfects, but as a whole he has given a decent thriller film.
Coming to Jeeva Shankar’s screenplay, he failed to tell the Motive in the movie. Why is he so Bad? If he is a goodie, why should he hide the Murder? Is he a Psycho or Pessimistic? It’s not clear anywhere in the character. The characterization lacks the depth.
Even the Investigation scenes are sloppy, they never take the evidence seriously. They even touch the evidence in the room with hand not using gloves. Even after one body is found, Police fail to take the prints and evidence from the body. The only thing Police does in the movie is coming after an issue and continue so called investigation without any clarity.
The story does glorify crookedness & manipulative behavior. And it finishes with a wrong message that anything can be done to live and a criminal can get away unscathed with his intelligence.
Though there are lots of loose ends to the tale left untied by the time the movie ends, director gets away by implying that this is not the real end & the story continues.
Music by Vijay Anthony is brilliant. Vijay Anthony has tried to prove his mettle with a good background score for his 25th venture. Makkayala Makkayala is a rocking number which is sure going to rock the dance floors while Thappedi Thappekadu is a good composition.
Cinematography by Jeeva Shankar is neat and Editing by Surya is okay till first half, but he fails in the second suspense elements are maintained at the nerve but loses its shine.
On The Whole, Nakili a finely-crafted thriller with some unexplained issues. Let’s hope Jeeva Shankar has his answers in the sequel, if there is one…
Survi Review: 2.5/5
Theatrical Trailer: