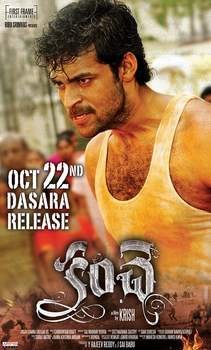 Telling the story of two Indian Soldiers in world War 2, Kanche narrative revolves around Royal Indian Army Soldiers Eeshwar (NIkitin Dheer) and Captain Hari Babu (Varun tej), who battle for Italy in 1944. Its 1944 and Italy is losing the war Hari Babu arrives to borders to serve the new team. As Eeshwar readies troops, we get to know several soldiers like Dasu (Srinivasa Avasrala). A sudden attack by Germans through Ju 870 and Tanks thrashes the newly recruited team. Eeshwar and officials surrender themselves to the German army to save their soldiers, but Hari Babu plans risk his life to save his officials. At this time, Hari letters to Seetha (Pragnya) help us connect with Devarakonda people and current situations. Whats Hari Babu’s relation with Eeshwar? Will Hari Babu survive the World War 2 battle? How Hari Babu and few other soldiers struggle to deal with the inevitability of their defeat. Forms the rest of the story line.

Varun tej lives in the role of Dhoopati Haribabu and in the scenes with Pragya and Nikitin Dheer, he’s almost does a miracle in his second attempt. Pragnya and Nikitin look decent siblings, but sadly that’s the only bit they can do in this film. They are repeatedly caught in one synthetic situation one after the other and very soon look bored beyond their wits. Pragnya spell bindes the viewer with her beautiful fresh look and decent performance. Rest of the characters Ravi Prakash, Satyam Rajesh, Posani Krishna Murali are fine their small roles. Srinivas Avasarala has provided a decent comic relief in parts.

I’ve seen many old school WWII films from the different soldier’s perspective. They are heart wrenching sometimes. And I can feel the pressure and intensity in the stories. In Kanche, I felt they have started many stories about the individuals and they were not really resolved or they were prematurely finished. Kanche with no storyline worth mentioning or some interesting moments that remain in the viewer’s minds, is a confused mishmash of inane situations reminding us of Letters from Iwo Jima and few similar films. The style with which the film is narrated is perhaps a new one in Telugu, Though it’s an already attempted format everywhere else. But the film tends to lose its grip in the second half and even at around 126 minutes, is a tad too lengthy one for its genre and storyline. A better storyline with more disciplined approach and ofcourse, a better script would have taken the film to an altogether new level.

Coming to other technical aspects, Cinematography by Gnana Sekhar Vs deserves a special applause for transforming present Georgia locations to 1940’s world war look. He is completely succeeded in making the frames look good in every situation. Music by Chirantan Bhat is okay and Background Score suits the mood of the film. Editing by Suraj Jagtap – Ramkrishna arram could have been better. The movie is so heavy on message (Break the caste barriers and stay united) that the storyline and narration takes the back seat. Many portions needed trimming and a better editing style would have helped the film’s pace and flow. Kanche has a decent action sequences. Thanks to producer, Art work by Sahi Suresh elevates movie to whole new level. Visual Effects of the film are all right. Dialogues by Sai Madhav Burra are okay. Production Values of the film are appropriate.

Kanche is another film where the plot is challenging and paper work is good but falls short in execution. Acting in most parts is acceptable but the film never tries to captivate its audience through its narration. The story progresses on predictable lines and things become boring, after a while. In short, it can be safely said that Kanche is Krish’s weakest work so far in his career (Only after his Bollywood film Gabbar). But it’s quite normal that you tend to forget the flaws and appreciate the best things about Kanche, due to its underlying honesty. It may not be there among the best/good, but the hard work that has gone into its making needs a dab.