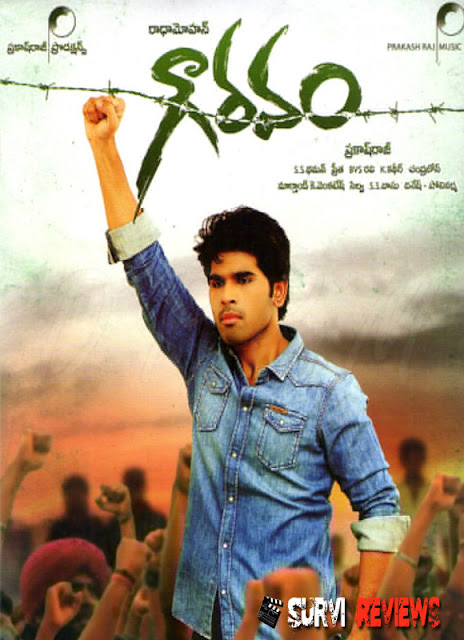 Gouravam about a businessman’s son Arjun (Sirish) who goes on to see his engineering friend Shankar at his village called SM.Palli, finds out something to his surprise. This because Shankar had high ambitions of doing good to the village.  He found from Shankar’s father (LB Sriram) that Shankar eloped with the daughter of the Village powerful man  Pasupathy (Prakash Raj), he decides to get into the bottom of the secret.
This starts trouble as he was viewed with suspicion from higher caste people of the villagers while lower caste from which his friend hailed from, stay away from him for the fear of assaults from higher castes. This was the first time Arjun sees caste system and he decides to fight it out  with the help of budding lawyer Yamini (Yami Gautam), daughter of Union Leader ( Nazar).
This leads to tussle between Pasupathy’s right man (Brahmaji) and his son Jagapathy. Sirish finds out the village’s most feared person Prakash Raj and how he deals with him forms the interesting aspect of ‘Gauravam’.
Chiranjeevi’s nephew Allu Sirish debuts with Gouravam. Allu Sirish doesn’t look like the conventional hero, and he looks fine in a few shots. He couldn’t give good expressions at crucial scenes. He needs to improve a lot on his on his expressions and get flexible in dances. Yami Gautham as lawyer Yamini did not get much scope for performance. Prakash Raj is good as the leader of upper caste. Harish as Prakash Raj’s elder son is just brilliant. Rest of the cast is okay.
Story of the film is a cliched one which we used to see in films that were made couple of decades ago. But, it still holds the viewers’ attention, if presented well. Radha Mohan does not show any promise. With the weak script and age old story, he has little to do in the film and he also failed in extracting some decent work from his artists. His style of taking is quite old-fashioned. Screenplay of the film is very predictable and fails to leave a lasting impact on the audiences. Music by Thaman is not up to the mark. Picturization of songs is bland and situation-less.  Fights choreography is not that promising. Dialogues are mediocre. Photography by Preetha is average. Editing by Alen is OK.
First half of the film is mediocre. Second half is dragged. The climax is unnecessarily hauled with excessive dialogues. On the Whole, Gouravam is a bit distraught and totally fails to move you. There is nothing intriguing in it that would send your pulses racing. The excitement is minimal and so is its emotional depth. In the pretext of delivering a message, Radha Mohan tried to force in a half baked product in to audience’s throats, which fails to deliver its goods.
Survi Review: 2/5
Theatrical Trailer: