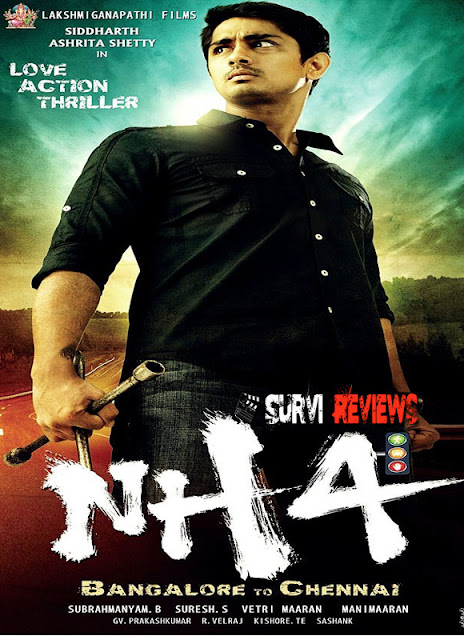 The story is very thin, Prabhu (Siddharth), a Telugu guy who comes to Bangalore for his studies and Rikshita (Ashritha Shetty), daughter of Karnataka minister falls in love with him. Rikshitha’s father appoints Manoj Menon (Kay Kay Menon) to bring back her girl. Will Kay Kay Menon succeeds to catch them? Will Siddharth succeed in his plans forms the rest of the story.
Siddharth tried his best as a massy and shrewd teenager. But his voice didn’t suit his character. At the same time, he failed to elevate the emotional scenes. Siddharth even tried mass steps in first song of this film. Heroine Asritha Shetty is charismatic in looks and is adequate in histrionics aspect. She reminds us of Kalpika Ganesh in Telugu. Kay Kay lived up to his reputation. Siddharth-Ananthapur gang is entertaining is in parts.
Udhyam NH4, directed by debutant Manimaran, a former associate of National award winner Vetrimaran. Scripted and written by Vetrimaaran, the story of this film is taken from his maiden project Desiya Nedunchalai 47, a Tamil film which was shelved. NH4 is tipped to be entertainer where in majority of the film will be shot in the highway between Bangalore and Chennai.
Basic storyline is very thin. But development of storyline into 2 and 10 min narrative is not satisfactory. The screenplay is good in the beginning of the film, but went out of hand in the second half. Direction of the film is good in parts. The aspect of Ashritha feeling desperate towards Siddharth in few scenes is good. But Manimaaran failed to transfer the emotions on the screen into the hearts of audiences.
The beginning of the film is good. The chasing episodes are not interesting enough. Too many twists and little substance make the second half a letdown. The plus points are Ashritha and music. The minus points are contrived screenplay in second half and lack of emotional appeal.
Music by G V Prakash Kumar seems to be improving with each film. Introduction song Rathiri is very peppy. Nuvu Evaro is very melodious. Except for Nuvu Evaro no other songs are promising. Background Music is also good. Velraj comes off good through his cinematographic work with apt lighting, while dialogues by Shashank Vennalakanti are okay. The editing could have been sharper. Production values of the film are decent.
After Award winning Polladavan & Aadukalam Director Vetri Maaran turns writer/producer for this movie. First half of the film is promising. But the second half takes a severe beating with dragged scenes and predictable narration. The introduction scenes in the Bangalore College – love scenes between lead pair are good. But it’s after the first half the things turn around in a drastic way. Second half runs on the predictable way with snail pace narration. Even climax fails to strengthen the weak second half. This film is a below-average fare for our audiences. Even hardcore Siddharth fans might not like it, as he tried to be Dhanush not him. The director failed in handling the film in interesting way. Only saving grace of the film is occasional comedy, love scenes in first half and one song.
Survi Review: 2/5
(Full Review First Posted in Tone)
Theatrical Trailer: