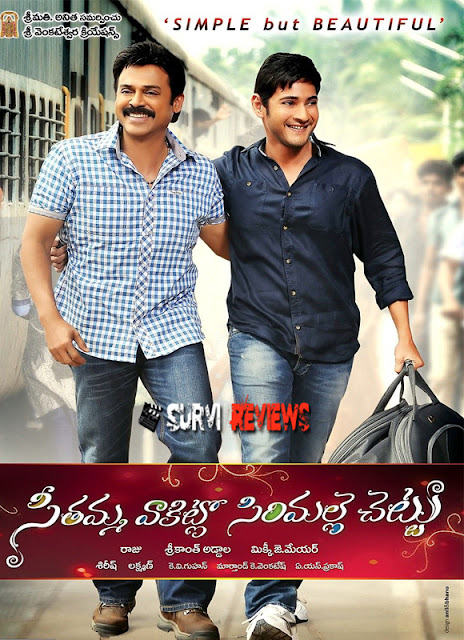 Review :  Seethamma Vakitlo Sirimalle Chettu
Cast:  Venkatesh , Mahesh Babu , Samantha , Anjali , Prakash Raj, Jayasudha, Rohini Hattangadi, Rao Ramesh, Ahuthi Prasad, Brahmanandam,Ramaprabha, Tanikella Bharani, Kota Srinivasa Rao and Ravi Babu
Music : Mikki J Mayer
Direction : Srikanth Addala
Producer : Dil Raju
Watched at Prasads, Hyderabad.
There are some milestones in film making  which makes directors, ponder over the kind of films they are making and then we suddenly see films following that specific pattern. The films that set the pattern are called Trendsetters and the pattern is called trend. That is the reason even though we have great literature, culture, traditions none of them reflect in our films.
Telugu movies have forgotten to embrace nativity in the movies while our neighboring film industries are not shy to portray it and hence they are a mile ahead when it comes to good cinema. The last time an honest film on family values was made (Bommarillu) which was passed as an urban romantic flick.
On paper “Seethamma Vaakitlo Siri Malle Chettu” might have been the weakest script, which Mahesh Babu has ever done, in his entire career but riding on the success of 2 blockbusters he had the judgment of the kind of cinema he would be showcasing as his first hat trick of his filmography. Same goes for Venkatesh, had he not have enough faith in the director considering the few lines he had in the movie, this generation would not have witnessed a film which will be talked for decades to come. SVSC is a film about virtues, values, integrity that are being treated as obsolete by majority of us. As the character of Rao Ramesh, a successful person, talks about the vision an individual should have beyond the goodwill we might be easily convinced to his statements but the director creates a plot through a family – Prakash Raj, his wife Jayasudha, their two sons Mahesh and Venkatesh , his mother Rohini Hattangidi, Seetha their daughter-in-law and Samantha as Mahesh’s love interest and finally explains the importance of believing in everyone’s wellness, having no interest in jealousy, the goodwill generated by being selfless. As many rumors regarding the plot followed, people might have their own expectations on the story but SVSC is shockingly simple and does not glorify itself with outdated heroism or rags to riches plot. It is dealt with simplicity and authenticity right from take one and the genuineness is reflected in the film.
Performances: Victory Venkatesh is at his best and gives credibility to the character. His restrained performance in emotional scenes is so natural that it strikes a chord with many people who often face dilemma whether to live life on their own terms or follow the herd. Generally guys flirt with girls but Mahesh is an exception. He makes us completely believe when girls flirt with him. He is at ease and he has got some witty one-liners and his Godavari Slang is utilized to the core.
His chemistry with Venkatesh in sentimental scenes are something we will cherish for long. Anjali as seetha got a meaty role and she performed beyond expectations and did complete justice to the role. Samantha isglamorous and repeated the magic of Dhookudu with Mahesh. Prakash raj is in fine form and the movies best scenes were carried on his shoulders so effortlessly. Jayasudha, Rao Ramesh,Tanikella Bharani, Kota, Murali Mohan every character is so well placed and has an start and end act.
Technicalities: Music by Mickey J Mayer might not have been on chartbusters but songs are situational and fit well in the movie. Mani Sharma takes up the big responsibility of BGM and he does a good job. Cinematography by K V Guhan is decent and Editing by Marthand K Venkatesh appears shaky (movie had been trimmed a lot and is evidently seen).
Highlights: The highlight of the movie is the bold step to present two big names to act as two characters in a simple story. Direction is first-class and the conviction with which the main point of the story is shown is so genuine. Writing especially Mahesh’s one-liners are extraordinary.
Negatives: Songs could have been better and could have been shot better. Production values are good but not in top notch as one would expect from a lifetime film.
Storyline: The film is set in the backdrop of Relangi, a small village in West Godavari district. Peddodu(Venkatesh),Chinnodu(Mahesh) both sons of Relangi Mavayya (Prakash Raj) and his wife (Jayasudha), are poles apart. Both do not inherit the qualities of Prakash Raj as Venkatesh is rigid and believes what he does is right getting emotionally charged when opposed, while Mahesh is diplomatic and gets things work in his favor with an artificial smile. While Venky loses many golden opportunities due to his nature thus becoming laughing stock in front of relatives, to make matters worse Geetha(Samahta) daughter of rich Rao Ramesh, brother in law of Prakash Raj fall in love with Mahesh. Venkatesh’s unemployment forces Prakash Raj to look for matches fo Seetha (Anjali) whom he brings up when she lost her parents.