…a film that every cinemagoer has to see. Or everybody those love thriller/horror at least. Or anybody who feels like watching a good film, anyways. U-Turn is the result of a crazy experiment that takes elements of Reema Kagti’s Talaash (2012) and mixes it up with an interesting, crime thriller tale.

Why do I say this? As the film tries to revolve around a supernatural entity, post a road accident on a double road fly over.

For permanent job, she starts working on a secret article “Accidents on Double Road Fly Over, Bangalore” and as she begins working on the story, realizes there are cement blocks arranged as a divider, which are moved by the motorists to take the U-Turn and escape the heavy traffic.  Where Rachana’s modus operandi was to make a mark in Journalism and marry her long time crush crime investigator Adithya (Dilip Raj). With the help of a homeless man, she tracks down the details about the motorists. And then things suddenly start changing as Police officer arrests her as the main suspect in a murder investigation. Did Rachana really kill a person? Will Police Officer Nayak (Roger Narayan) help her out of these occult scenarios? How the new paper story is connected to the murder/suicide forms the rest of the storyline. 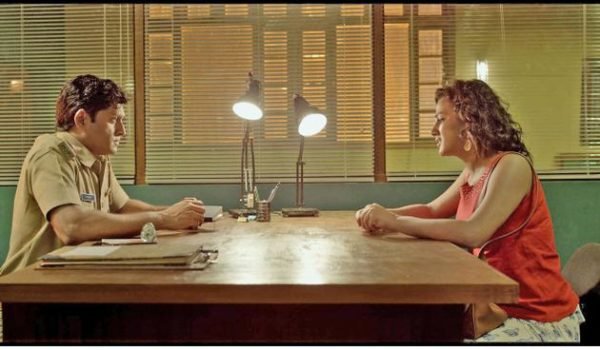 If Pisaasu (2014), was a love story that contorts into a supernatural thriller. U-Turn flips the coin.

Let’s divide the movie into two halves “before” and “after”.

The before half was strikingly good – you’re still not quite sure what’s going on and the movie does a good job of keeping the intrigue level high, with some superbly done cinematography and well – scripted characters. As the opening credits begin with “Karma” theme and a tilted camera it successfully manages to grab your attention and viewer is all set to watch an engrossing thriller. Very casually and calmly director Pawan Kumar, introduces all his characters on the screen and then the investigation begins within the first 35-40 minutes of the film itself. As the script unfolds its various chapters, U Turn starts gripping the viewer and one finds himself becoming interested in its each new proceeding quite easily. So, first half largely proves to be a winner giving you a taste of fine mystery thriller with many realistic and relatable characters, directed pretty well by Pavan Kumar.

But the after half begins with a slow narrative mainly due to the elaborate depiction of the plot added in the script. The pace drops for considerable period of time and the its goes down to final 30 minutes of the film where the viewers await for the shocking revelations coming their way to amaze them. But unfortunately after some good sequences (Spoiler: Like Rachana testing the point on herself and the dream sequence), when the finale is there, U Turn fails to deliver and doesn’t even make any solid impact on the viewers with its loose and age old conclusion (Spoiler: Preventing the main culprit from suicide & wanting to make sure he lives the rest of the life weltering in guilt).  Exactly what spoils the game in Uturn when all of a sudden, Director Pawan Kumar plays a supernatural card in the final moments and puts all the blame of those strange cases on the supernatural entity (Spoiler: Without proper explanations given to 14 murders or leaving Rachana in the end for a deal). 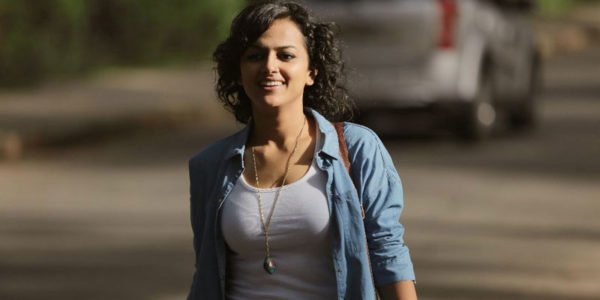 Other technicalities, Visually U-Turn take you into the world of Bangalore with good cinematography and Art Work. Background score by Poornachandra Tejaswi adds to the spirit of the movie as per requirement and Pawan intelligently used the score when required. Both cinematographer (for the introduction, Interval shots, Dream Sequence) and Music Composer Poorna Chandra Tejaswi (“Karma” track) deserve special applause for their effort. The length of one twenty two minutes is just fine; the editing by Suresh Armugam is crisp and dialogues are well written. Production values of Pawan Kumar Studios are solid for a shoestring budget film.

Coming to performances, watch out for Malayalam film Kohinoor (2015) fame Shraddha Srinath in U Turn, with the effortless ease with which she has shown myriad of emotions presages well for her future. I dont think Samantha Ruth Prabhu would be apt choice for Sharaddha Srinath’s role in Telugu – Tamil remake. Roger Narayan is fine as the tough cop, but he also looks like trying too hard in his casual conversations with Shraddha. Rangitaranga fame Radhika Chetan is fine in her glamour less mother act and Dilip Raj gets decent marks along with other supporting cast.

U Turn is admirable for trying to inject new life into the Horror Thriller genre, but I’m not sure it’s entirely successful. Its intention isn’t to be scary or thrilling; however, a better second half point could’ve kept the allegorical message whilst adding, in my opinion, the edginess it was missing. Overall, U Turn is a pleasant one time watch for its unique selling point.