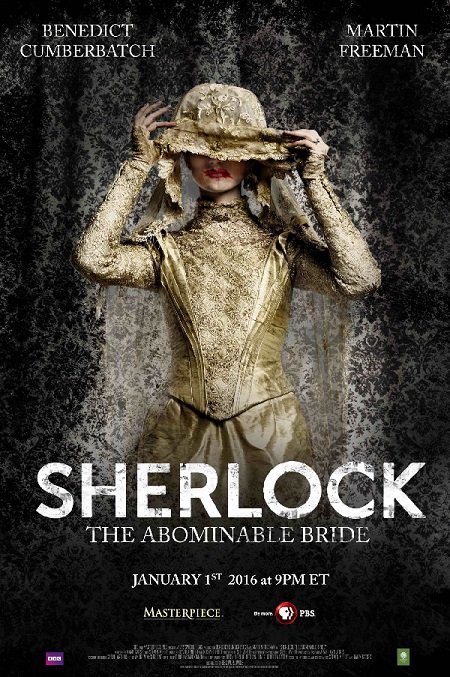 Sherlock used to be one of my favorite shows back before the 3rd season, and it jumped the things around with “Sherlock: The Sign of Three” and ever since then I started watching Elementary (A modern take on cases of Sherlock) as a better Holmes adaptation.

The Christmas special episode, mostly set in Victorian London with Sherlock and “John” Watson attempting to solve the mystery of a bride exacting vengeance from beyond the grave.

Though the resolution to the main story reminded me of the “Young Sherlock Holmes” (1985) movie. But, The Abominable Bride is sophisticated metafictional experiment – a narrative puzzle for sherlockians. In modern Sherlock Holmes fictional universe, Conan Doyle’s Strand Magazine stories or Victorian Holmes are non-existent. Writers Moffat and Gattis tried to stand up to the task of taking Holmes back to his Victorian setting from modern London. The pre-opening sequence display period setting that plays out like a fun remake of first episode of Sherlock. First thirty minutes gives us interesting case and a decent villain. However, at some point down the road. The Abominable Bride loses a lot of steam. Post an hour TAB gets too convoluted, it becomes more about pleasing fans and showcasing how offbeat and lovable Sherlock is, instead of centering on whodunits containing ingenuity and tautness. However, if you have seen Doctor Who: Heaven Sent (2015 Season), Moffat tried to do something similar. If this special episode stayed in the Victorian era, I probably would have enjoyed it a more, but as a result it was quite underwhelming.

What was the whole point in this? Moffat, making the story look incredibly convoluted doesn’t hide the fact that once strip back everything that happened, nothing actually happens in the present era. Anyone who has watched the first two seasons know that Moffat and Gatiss can come up with something better than this, especially when given an entire year to produce an one single special episode. The duo even missed an incredible opportunity to explore the relationship between Sherlock and Moriarty, the directing is also clumsy. Lead actors Cumberbatch and Freeman are decent, even though the script makes them look like an unlikable misogynists.

I was hoping the Sherlock series would get better, but instead it’s getting worse. I liked the concept of this special episode, but the way it was addressed was very problematic. If at all, I had any interest in the next season I lost it with this very episode. This is the reason why I stopped watching Doctor Who, in the first place.

“It’s not the fall that kills you, Sherlock”