Interview with the New Daddy in South “Kabir Duhan Singh”

Interview with the New Daddy in South “Kabir Duhan Singh”

At the age of 28, Kabir Duhan Singh came out of nowhere to headline Radhakirshna’s 2015 commercial entertainer “Jil”. In the six months, he’s racked up credits that would made seasoned south veteran actors covetous, appearing alongside everyone from Gopichand to Ajith and Pawan Kalyan in big budget entertainments like “Kick 2” and the upcoming “Thala 56” & “Sardaar Gabbar Singh”.

I caught up with the actor, whose currently in the midst of shooting Nara Rohith’s latest film “Maan Karate” (Telugu Remake) in Hyderabad to discuss about his remarkable rise and year of going bad.

Survi: Kabir, thank you so much for talking with me. So, we usually start up by talking about kickoffs, tell me a bit about life in Delhi and how you stepped into the world of Acting?

Kabir: I was born and brought up at Faridhabad (20 Kms from Delhi). I grew up spending loads of time playing cricket and being a moderate pupil. I went into Delhi University (Thanks to Sports quota, Laughs!), but it wasn’t where my heart belonged.  Due to my good looks and physique, I turned into modelling and ended up as one of the top three male models in India. I had done hundreds of ramp walks and good number of commercial ads for companies, like Samsung, Hero Honda Most of all, I have worked with some of the best models, makeup artists and photographers that I have looked up for past seven years. I pushed myself further by getting trained as an actor (by watching loads of movies & of course an acting course) and trying to debut through a Tamil/ Telugu film. Surprisingly, how I fell into acting was all a bit of an accident, It just happened, thanks to Radhakrishna and U V Creations for believing me.

Survi: Every Model tries to start up their career in Bollywood, but you tried to debut through a South Indian film, why?

Kabir: Tamil (Content driven) & Telugu (Commercial driven) film industries are doing well when it comes to technical side in film making. By and large they are pretty similar and are close knit industries. “What I think” is South Indian people respect your talent, if you have talent you can reach great heights over here. The fine result is before you, post my first project, (in a span of six months) I have signed over 10 films in South. Coming to Bollywood, it’s just a star driven industry and they are not very professional compared to south. I have my experiences from my modelling days. 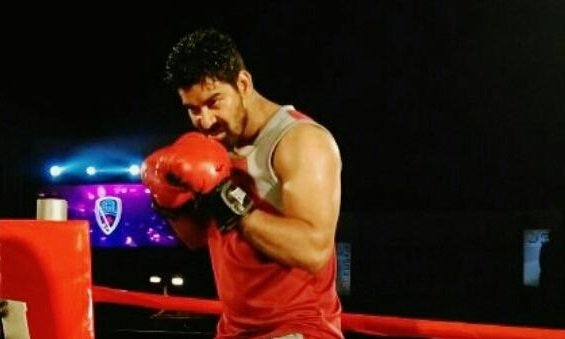 Survi: How did you approach your characters?

Kabir: The day I was casted for Jil. I started seeing few gangster films and started imitating-improvising their histrionics according to our script. Maan Karate remake gave me an opportunity to live in a boxer’s role. For which I went out and bought The Rocky series and watched few expert boxing videos online. My goals were to move as a professional boxer and look as a hard-shelled baleful personality of Rocky. It’s so easy to take down these big brutes – these fierce yet funny characters and look them vincible the whole time. But I wanted to have this encircling, steady presence that would suddenly make a surprise move. I must thank the director, who allowed me to make few adjustments for my role.

Survi: Let’s talk about your roles. It seems like from Chota Nayak to Boxer, you’re playing some different pretty badass roles here. How do you feel about that? Do you feel it frees you? Provides opportunity?

Kabir: You know, I’m grateful that I’ve met and worked with some pretty diverse, savvy, mind-blowing creative technical persons since moving here to South India. I’ve also been fortunate to play variety baddie roles in the short span of my career those have been extremely complex. So, no, I don’t feel curbed. All these choices have been mine. All of this is experience. Survi: How was it working with Ajith?

Kabir: Oh! It was a dream come true for me. Post the release of Jil trailer first call I’ve received was from Ajith’s film. He is very down to earth person and god of Tamil Industry. The first day of the shoot was very nerve-racking day of my life. To be honest, I think everyone was excited and but a little affrighted too. I turned around and saw Ajith sir talking to the crew around. It felt like the whole energy of the set was changed. Even while working for Thala 56, Ajith sir was very helpful and made me comfortable with his conversations. My dad is everything to me, learnt a lot of things from my dad and I can compare Ajith sir to my dad. It was quite a learning experience.

Survi: Tell us something about Thala 56?

Kabir: I’m playing a gangster role in Thala 56. Mark my words Ajith sir fans will go crazy with every scene in the film, even though I was a bit heavy on Ajith sir in the Interval bang (Laughs!). I’m very positive about the film.

Kabir: The photo-shoot happened in Milan (It was my Dream country). First they thought to shoot principal scenes in Dubai, then Australia (It didn’t work out) and finally they confirmed Milan (Was totally shocked!). I bought a new camera over there, and was clicking everyone on the shoot. That’s when Ajith sir approached me asking “Do you know I like photography?” and that’s when he clicked my 3-4 pictures. He even edited the stills and mailed me in an hour time. Those were one of my best shots. 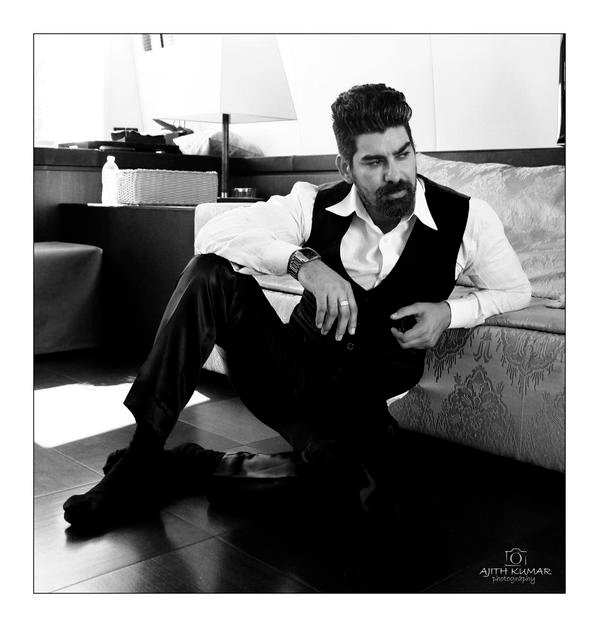 Kabir: He is jack of all trades man, he is a racer too.

Survi: How was your experience with Pawan Kalyan’s Sardaar Gabbar Singh?

Kabir: To be honest, I was in shock and disbelief. This was one of my dreams to act beside Pawan sir and seeing my dream come true was an amazing experience. I’m playing one of the baddies in Gabbar Singh sequel. Will be meeting Pawan Kalyan sir in the next schedule. Totally excited. Survi: You’ve worked with Ajith, Ravi Teja, Nara Rohit, Sunil, Gopichand and Now Pawan Kalyan and Balakrishna . That’s quite a line up. Do you have any actors on your wish list to work with next?

Kabir: Don’t forget Aadi!!I got to work opposite him in a passion project with his father Sai Kumar as producer. I got to check Ajith sir, Pawan Kalyan sir off the wish list! I absolutely admire Mahesh Babu, Allu Arjun, Vijay, Ram Charan, Prabhas… they seem like the coolest guys in south industry.

Survi: How many friends do you have in Tollywood?

Kabir: I have few great friends. Radhakrishna is a great friend of mine. Also associate director Anu and Casting director Srikanth happens to be amongst my good friends I did my first film with Radhakrishna, how can I forget that he was the first director who trusted me and offered Chota Nayak role in his film.

Survi: You are doing around 10 films in Tollywood and you have never dubbed your lines in the first two films released so far. Are you planning to dub for your upcoming films?

Kabir: Actually it didn’t worked out. But I asked director Radhakrishna for the test shot, it didn’t work out well and Ravi sir dubbed for me. I’m learning Telugu now will surely dub my lines in near future.

Survi: So whats for the future?

Kabir: I’m waiting for Maan Karate remake to release. I do have Thala 56, Balakrishna film, Sundarapandiyan remake, Sunil film, Aadi’s film & a Kannada film lined up for release this year, but nothing in Bollywood yet.