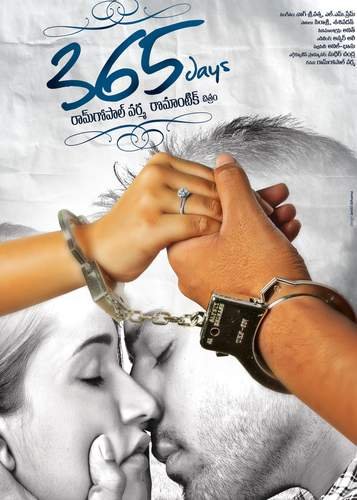 Maverick Ram Gopal Varma is staging his comeback to the romantic genre with 365 Days. The last time RGV directed a romantic entertainer was in 1999, its Prema Katha and it won a prestigious Nandi Award in the best film category. Coming to the story of 365 Days. Its runs on the same format of 500 Days of summer and showcases the differences in modern relations in 365 days. Apoorv (Nandu), who lives his life according to his rules, and settles in his life in very young age. Apoorv comes across Shreya (Anaika) in a party hosted by his best friend Prashanth (Krishnudu) and falls in love in the first instance. In the 100th day they both agree to marry. After 47 days of their marriage they start feeling differences between them and they start having other thoughts to get separated. Will they get separated? What’s their issue with marriage? What was the whole point behind Varma’s romantic film? Will the marriage work or not in modern age forms the rest of the storyline.

Nandu is promising in his role as a lover and husband. Surprisingly he looked dreary on screen. Anaika Soti is visual feast and she couldn’t deliver in terms of performance. The one to watch out for is Posani Krishna Murali as a man against marriage. Though his comedy is cheap, he was successful in tickling the funny bone. Rest of the characters Satya Krishna, Geethanjali, Krishnudu, Kondavalasa & Surekha Vani are okay in their small roles.

The experience of watching “365 Days” was certainly not a pleasant one for me, who once felt gallant to be called a follower of the cult cinema made by Ram Gopal Varma. No doubt, the setting regarding his directorial venture has gone from disappointing to horrible in recent years but honestly I never felt this bad before. RGV was one of those few directors who made very distinctive films in early 90’s and 2000’s. But it was shocking seeing such a low grade content from the film maker, which made me feel horrible, distressed and thwarted.  “365 Days” is a story of most modern couples and it’s based on my personal experiences said Varma while addressing the media. With a storyline like this, one could easily impress audience with some feel good narration. But as far as 365 Days goes there is nothing to write much about, since it doesn’t even offer a single interesting scene right from its first frame. The film talks about modern relations is needlessly stuffed with songs and over expose. The performances of the leads range from decent to immature like recent RGV films. 365 Days looked like an immature attempt from the word go. Most of the sequences in the film lacks credibility. Varma has not focused on the continuity aspect while many sequences are repeated. You feel that the monotony of narration is slowly fizzling out from 147th day after marriage is narrated. But by that time your patience would be exhausted, and 365 Days end up another ordinary film that fails to make any impact.  When the Dialogues are bookish.

Coming to other Technical aspect, Anith Madadi’s cinematography is okay. He could have limited the over usage of slo-mo shots in the film. Music by Nag Srivasthav is fine. But too many forced tracks blows the narration of the film. The Background Score of the film is apt. Editing of the film by Anwar Ali is adequate. Editing of 10-15 minutes towards second half could have helped the film. As the pace of the film needs to be lot brisker to match the genre of the film. Production Values of ZED 3 pictures are good.

“365 Days” is directed by Ram Gopal Varma, who has great passion for film making. But understanding the storyline and creating a good screenplay is more important than just being passionate about making films. 365 Days clearly lacks the feel good narration and clearly proves that RGV lacks experience in modern relations. All in all, watch 365 Days – Only if you have patience to withstand the RGV standard torture of two hours.