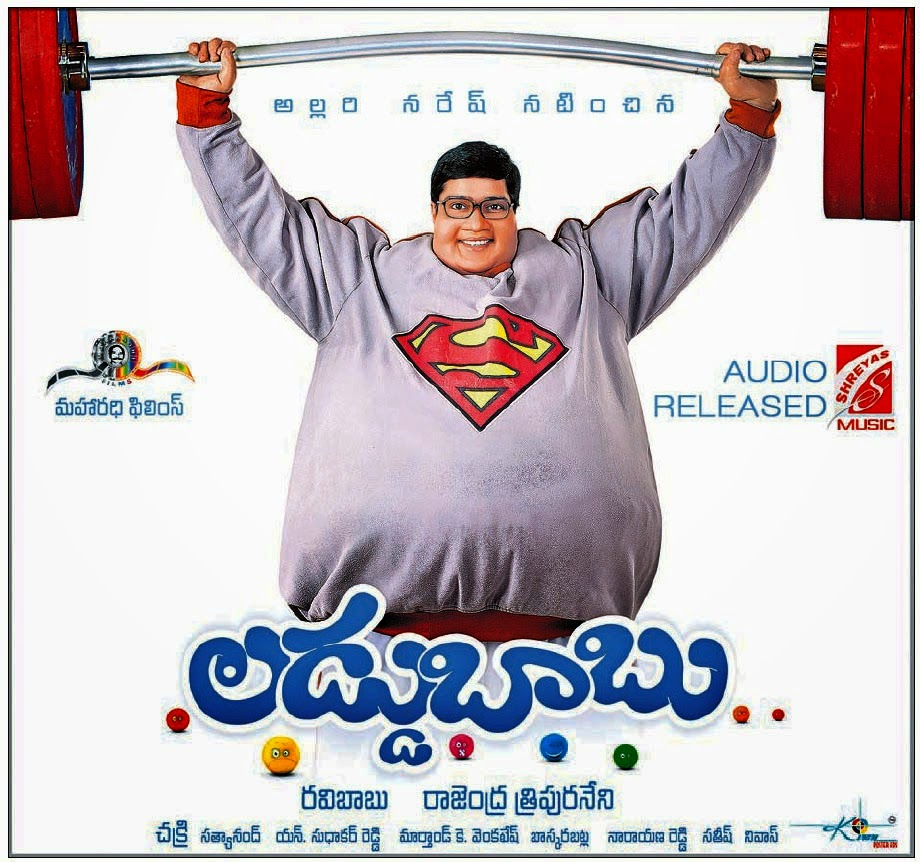 Music Director: Chakri
Cinematography: Sudhakar Reddy
Screenplay: Satyanand
Dialogues: Nivas
Director: Babu
Censor Certificate: UA
Runtime: 143 Minutes
Story:
Laddu Babu (Allari Naresh) gets bitten by African Ensifilities Mosquito and turn out to be Fatso (268 Kgs) in 3 weeks time. In the same time, Kistaaya (Kota Srinivasa Rao) fails to get the ancestry property from his wife. Now he needs to make Laddu Babu marry someone that how he can get the rights of his ancestral property. Kistayya tries everyone around to make Laddu Babu marry, but he fails in his every attempt.  Laddu babu falls in love with Maaya (Poorna) and starts following her. That’s when he comes across Murthy (Atulit) who want to make friendship with him. Laddu babu rejects his fraandship offer and due to some circumstances Kistaaya makes him leave his home. Murthy supports Laddu Babu and makes him “Stay over” his place for few days. Who is Murthy and why does he falls behind Laddu Babu for friendship? Who is Bhumika Chawla? Will Laddu Babu succeed in marrying Maaya forms the rest of the story line.
Performance:
Allari Naresh had taken a lot of effort to suit the character of the film. For example, his prosthetic make up added 23 kg of extra weight. It used to take 6 hours to apply and almost two hours to remove. His character reminds us of Rajendra Prasad in Kobari Bondam. Naresh carries the whole burden on his shoulders. He displays right emotions and fun when required. There is no doubt he worked on the script and on his acting. Avunu fame Poorna strike the right cords, she is okay in a simple and uncomplicated role. Bhumika who ruled South Indian films for few years is making a comeback after three years with this film. Bhumika delivers what is expected of her. Kota Srinivasa Rao carries off his role with typical elan.
The comedy of Ali, Venu Madhav, Bhramanandam, AVS, Krishna Bhagwan, M S Narayana and JP’s doesn’t work as it is contrived in many places.
Technicalities:
Story of the film is very thin; except for the fatty lead character nothing changes it from other typical Telugu films in from 90’s. The director takes a torturous route of satirical lines to narrate the story. But even then the confusion of the director is more profound as even with a limited budget, the story could have been narrated in a straight forward manner. One really doesn’t know whether this film was meant to be a comedy or a semisweet slice of life dram-edy. The manner in which Allari Naresh ply it, it appears to be neither. The film in fact doesn’t display the kind of energy that could affect the audience watching it. It is plotted with such detachment that it’s far more Iikely to put you to sleep, than entertain you. Laddu Babu could have been a total washout but for the screen presence Allari Naresh and Bhumika Chawla. The dialogues rendered by Nivas are also not so effective. But for these aspects, the film is total let down. The characters in the film are not well defined and inconsistent. The twists and turns in the second half are too predictable. The songs are well composed have been shot picturised in a better way and they do not make any impact. This one hundred forty three minute story is narrated in haphazard fashion and it needs a lot of patience to go through the narration of the film. Editing of the film is okay. Cinematography by Sudhakar Reddy is neat. The art work by Narayan Reddy deserves a special mention the lead house, the art work in the songs are good. The production Values of Maharadhi Films are middling.
Analysis:
First half of the film is slow and second half drags. The treatment of the film is different but the way thin storyline is dragged to the core makes audience get frustrated. The problem areas are the writing and the narration. The writing is not sharp or humorous enough and the treatment is just too soft to make for an interesting meshing. This film is just a bit too dull to entertain. The different type of narration to a typical thin storyline don’t really win you any points at the box office, Laddu Babu is a good example of that. Final word, Vaddu Baboi!!
Survi Review: 1.5/5
Theatrical Trailer: