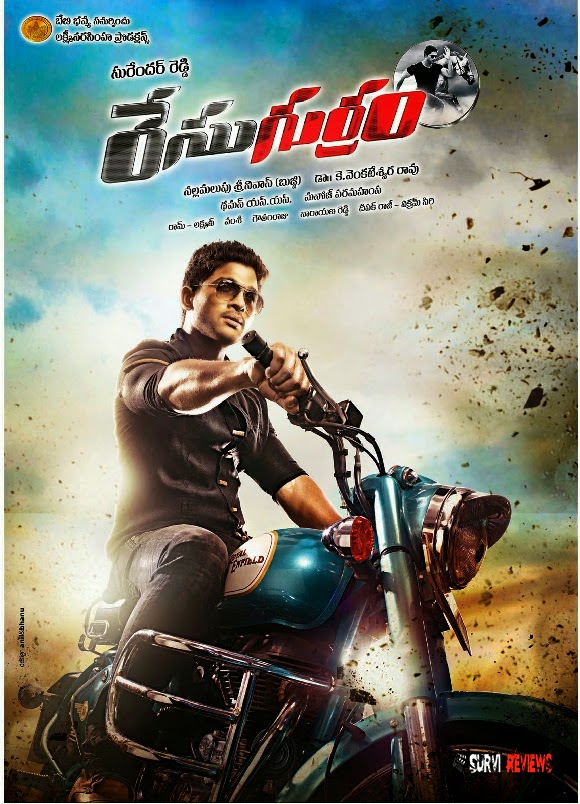 Star Cast: Allu Arjun, Shruti Haasan, Saloni Aswani, Brahmanandam, Prakash Raaj, Ravi Kishen, M S Narayana and Shaam.
Director: Surender Reddy
Music Director: Thaman S S
Censor Certificate: U/A
Runtime: 163 Minutes
Watched at Prasadz,
Brothers Ram (Shaam) and Lakshman (Allu Arjun) have a very cat and mouse relationship. Lakshman (Allu Arjun) is happy go lucky guy plans to leave to . He falls in love in the first instance with Spandhana (Shruti Haasan) and starts falling behind her. They share a unique bonding in sometime. Ram turns as ACP and starting going behind corrupt thug – aspiring politician Shiva Reddy (Ravi Kishen). That’s when Shiva Reddy plans to kill him and clear his hurdles before the elections. But Lucky comes into the picture and saves his brother from the trouble. The twist in the tale begins. Will Lucky save his family from the Shiva Reddy. Who is Kill Bill Pandey (Brahmanandam)? forms the rest of the storyline.
Allu Arjun is real good as Lakshman, and has improved his comic timing terrifically with this role. He sings, dances, and even flexes his muscles apart from doing some unbelievable aerobics stunts. The freestyle steps in the Down Down songs are interesting. Ram (Shaam) acted as a police officer and he did a good job though his character limited. The chemistry between Shaam and Allu Arjun is middling never really lifted the film with their chemistry. Brahmanandam is major highlight of the film. Elevates the pre climax and climax episodes with his powerful introduction as Kill Bill Pandey. Director must appreciated for the Shruti Haasan’s character as Spandana. The ways Shruti emotes – mannerisms in the film are funny. Saloni is okay in her extended cameo. Tanikella Bharini did a reasonable job. Mukesh Rushi as the baddie is powerful in looks, while Ravi Kishen in negative character showcases his worst performance.
Jayaprakash Reddy has played the role that he had done several times in the past. PRakash Raj’s cameo evokes some interest while M S Narayana, Srinivas Reddy and Taagubothu Ramesh comedy is a big letdown and is no patch to his earlier works. Pavitra Lokesh plays a loving mother.
Story of the film is nothing new its a tale of two brothers who go against corrupt Politician to save their family and state from thugs. There are some films which start of casually, give you high hopes and then fizzles out in the second half and ends with comedy bang towards the end. Race Gurram is one such film. It had a promising start, but then ends up like just like another action film with the standard set of villains and the common man ranting against the system, which we have seen in many Telugu films before. Director Surender Reddy has given his careers weakest film with Race Gurram.
The Boochade Boochade.. Gala Gala.. Down Down songs are fine ones from Thaman SS. For this type of major action comedy entertainer cinema the handling of cinematography is very difficult. Manoj Paramahamsa gives a competent work. Dialogues by Vemma Reddy are routine. The Background Music at places increases the commercial value of the film. The editing is fine from Goutham Raju. The Sri Lakshmi Narasimha Productions are grand.
Race Gurram begins in style, promising aplenty. Sadly a sense of lethargy creeps as the narration starts. With many ups and downs, the film ends on a predictable path without much to cherish. The star cast no doubt gives their best. The major asset of the film is Brahmanandam’s introduction and his performance. The cinematography by Manoj is good while Thaman has given brilliant Background. Yet the mix goes wrong which mars the show. On the whole, Race Gurram is a formula flick high on prediction. Watch it for the Allu Arjun and Brahmanandam.
Survi Review: 2.5/5
Theatrical Trailer:
17.412463578.4652674