It seems a bit strange that while the rest of Telugu film industry is trying to change colours, growing bolder and braver, one wonders why actors like Ram Charan resort to old fashioned stories with clichéd dialogues, presentation and an outdated climax like his latest Yevadu! The film looks like a poor man’s Faceoff and the story is as old as the hills with no semblance of either style or substance.
Yevadu is a typical masala movie with a very thin story line. Dr. Shailaja (Jaya Sudha) risks her career to save 70% burned case at hospital. Satya (Allu Arjun), who sees Deepthi (Kajal Aggarwal) getting killed by Dheru Bhai’s (Rahul Dev) goons and starts hunting them down. With the help of tenant (Brahmanandam) and Amy Jackson, Satya kills the persons responsible for the murder. Things turn around when Subbaraju tries to kill Satya in Vizag. Why did Subbaraju attack Satya? Who is Subbaraju? How Satya manages to solve all the problems with the help of Dr. Shailaja forms the rest of the story. 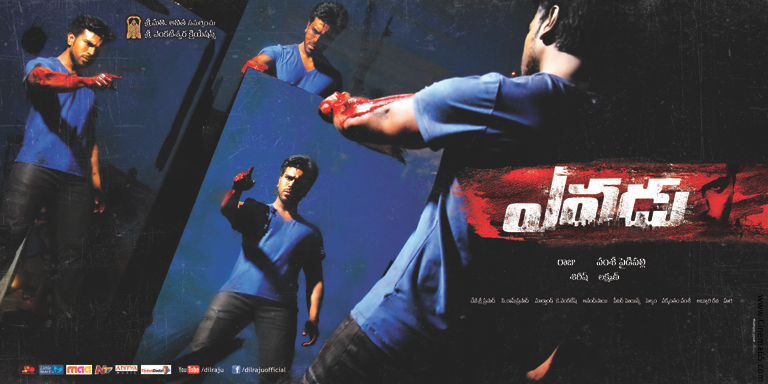 Ram Charan’s dual character performance is very neat. He has extended his boundaries with this performance. Still he hasn’t taken conscious effort in showcasing the characteristic difference. Charan’s moves in “Freedom” track are superb. Brahmanandam is not at his best in the movie and the gross comedy irritates the audience but it strikes well at few places. Allu Arjun is a good performer and his performance is reaffirmed yet again with Yevadu. Amy Jackson looks galmourous. She needs to work on her histrionics. Shruti Haasan has major character to play in the movie, she delivers it with ease. Kajal Aggarwal has done a decent job. Kota Srinivasa Rao is highly effective in his role. Sai Kumar is good as powerful goon Dharma. He has some powerful lines in the movie. Rahul dev doesnot have much importance in the film and his presence is limited to few scenes in first half.
Music by Devi Sri Prasad is the major USP of the film and the BG music is aptly done DSP. Ram Prasad’s cinematography is neat. Marthand K Venkatesh’s Editing could have been crispier in the second half. Director Vamshi Paidipally has created a script with lot of intensity but lacks the apprehension or the twist needed for a genre like this. Some scenes in the movie reminds us of Vikramarkudu and Chatrapathi. His casting is pretty good, but you don’t get hooked into the film. The first half of the film is okay while the second half is boring in parts. The story does not move forward much in the second half and it is saved only by the decent commercial masala quotient. The screenplay is conflicting. The villain and his tantrums are routine and hence they fail to make any impression. Director’s decision to avoid seriousness in any sequence reduces the overall impact of the film.Where are the brainy commercial movies. Looks like audience are waiting for a decent commercial movie, because it has been the season of poor commercial movies.
Survi Review: 2.5/5
Theatrical Trailer: