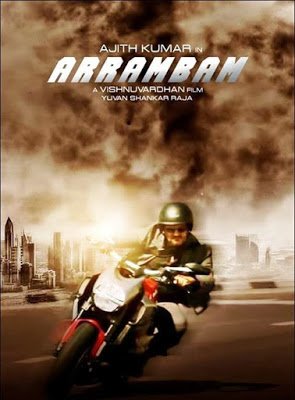 Cast : Ajith, Arya, Rana, Nayanatara, Taapsee Pannu, Kishore.
Music Director : Yuvan Shankar Raja
Director: Vishnu Vardhan
Censor Certificate: U
Runtime: 157 Minutes
The plot is nothing out of the box. AK alias Ashok Kumar [Ajith] is a man behind a series of bomb blasts in Mumbai. Partners up with Maaya (Nayanthara) set on a serious mission against the government. Ashok kidnaps Arjun (Arya), a computer network expert to assist in his plan kidnapping his girlfriend Anita (Taapsee Pannu). When Ashok approaches his goal, Arya spoils his plan by getting him arrested by the honest cop Kishore. However, Maaya reveals Ashok’s strong, dark reason for his mission. Who is Sanjay (Rana Daggubati)? What Ashok Kumar’s strong rivalry with Government? Will Ashok succeed in his plan forms the rest of the story line..
Movie undoubtedly rides on Thala Ajith’s Shoulders and the expressions, style he exhibits is awe-inspiring. Thala’s salt and pepper look aptly suits his character in the movie. Ajith fans have plenty of slow walking moments to scream and whistle in delight. Arya is okay in his role as a hacker. Nayanthara is fine in her small role.  Taapsee Pannu has overacted in her role as Arya’s love interest.  Kishore, Mahesh Manjarekar, Atul Kulkarni have nothing much to do in this film. Rana is promising in his character. Rest of the characters just supported the lead cast.
The basic plot of the film is inspired by the Hollywood flick Swordfish (2001), but development is good. Director Vishnuvardhan could not get the things right in the both the parts. What is missing here is the interesting elements to maintain the thrilling flow. Everything settles down easily and the scenes are very much predictable. Screenplay of the film is totally flat.
There are many logical loop holes and the director should have done some more deep research while handling sensitive topics like cybernetics. Scenes like Villain know how to scam, but not how to kill a person – Flying out of India after he escapes from prison – Government information is so easily available that you can plan the robbery anytime, anywhere – Even Reserve Bank allots you an account and a Bank can afford Biometrics but can’t afford a camera to monitor.
Even though the songs are horrible they are misplaced and spoils the thrilling flow of the story. Camerawork by Om Prakash is neat but too many slow motion shots. Editing by Sreekar Prasad is adequate. Stunts in the film are below average. Production values of the film are middling.
First half of the film is too flat. Second half flash back episode is fine, but execution in the later part fails to excite. The main drawback of the film is Vishnuvardhan who provided pathetic script, weak narration and dismissal direction.
Despite having a good storyline, the poor execution makes it uninteresting. If the screenplay would have been more gripping, we could have witnessed a promising thriller. On the whole, an uninteresting action- thriller that pushes its viewers to have a sigh of relief when the film gets over.
Survi Review: 1.5/5
Theatrical Trailer: