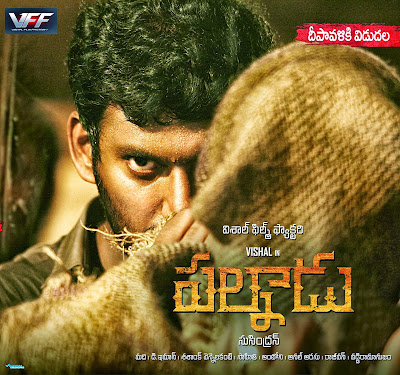 Cast: Vishal, Bharati Raja, Lakshmi Menon and others
Cinematographer: Madhi
Music Director: Imman
Story–Screenplay–Direction: Sussenthiran
Runtime: 145 Minutes
Siva (Vishal) a middle class youngster living with his Family. Father (Bharathi Raja) an honest civilian always says to fight against evil that’s how Siva’s bigger brother gets into trouble. As he was going against the local don (Sharath Lohitashwa) to save the people who dig four hundred metres of deep mines and die. But government given the permission to just dig sixty metres deep into mines. He mails the total document against the local mining mafia and closes the mining operations. In the mean while Siva falls in love with Malathi (Lakshmi Menon) a school teacher in a private school. But things turn around when father finds out the reasons behind his elder sons trouble. Too seek revenge on the people who planned to get rid of his elder son, Father seeks the help of bigger goons to get rid of them. Even Siva gets to the know the facts in the same time. Will Siva leave his cowardliness and go behind the goons? Will Bharathi Raja’s plans worked out? Will locals get rid of mining mafia forms the rest of the story line.
Vishal does not impress in this film at all. Vishal’s body language didn’t completely suit his character in this film. His mannerisms and expressions for particular scenes are very artificial. His melodramatics are decent. Lakshmi Menon is okay in this film. She has got big eyes and decent body language. She did suit in her character of Malathi. Bharathi Raja has got pretty neat role.  Sharath Lohitashwa is very causal in his negative shaded role. Rest of the supporting cast is fine.
The main point of the story is very similar to one thread of Naa Peru Siva storyline in which hero takes the revenge the people who killed his father. Screenplay of the film is very equable and dull. Direction by Suseenthiran si very average his mark was seen in Lakshmi Menon introduction and love sequences. Narration of this film is stale as it takes beaten path, overall Suseenthiran’s attempt to showcase revenge saga recoils. Dialogues by Sashank Vennelakanti are very routine. Cinematographer Madhi (Mirchi fame) failed to repeat his magic on screen. He didn’t do any home work while canning scenes in the dark with regular street lights. Music of the film is pathetic. Songs are major speed breakers to the film’s narration. Songs are not even translated into good visuals on the screen. Even Telugu lyrics are awful. BGM is impressive in parts with drums and guitar tunes. Production values by VFF are fine.
The major problem with Suseenthiran’s Palnadu is he taken the same story line of Naa Peru Siva with some more characters with feel good texture, but he couldn’t inject the souls into the characterizations of the hero and heroine. The only major plus point of the film is BGM apart from it Fights sequences which are decently shot. Especially Vishal’s re-entry in the climax fight is impressive. Unfit script limit the opportunities of the actors.
Palnadu ends up as 145 minutes of anguish. Everything starting from the story, narrative, song picturization and dialogue delivery is old-fashioned. There is no attractive element for the viewers in this routine revenge drama.
Survi Review: 1/5