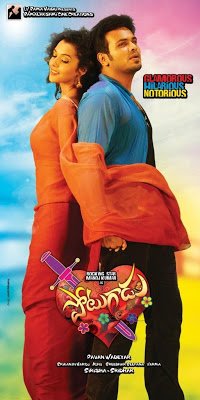 Star Cast: Manoj Manchu, Posani, Sakshi Chowdhary, Simran Kaur Mundi, Rachel and Anupriya
Censor Certificate: A
Runtime: 125 Minutes
Directed by Pawan Wadeyar
Music Director: Achu and Chakri
Govind (Manchu Manoj) a depressed young man ready to commit suicide as he got rejected by Mumtaz (Sakshi), a Muslim girl. There he finds a Software engineer Venkat (Posani) another depressed lover about to commit suicide. From there each share there Love life and where Venkat (Posani) finds out Govind (Manchu Manoj) has failed four times in love with Vaidehi (Simran), Mumtaz (Sakshi) Stacy (Rachel) and Mary (Anupriya).Venkat has been cheated by Swetha a co software professional. How they find their love and give up their idea on suicide forms the rest of the storyline.
Manchu Manoj is okay in his character, but he was more concerned about other technical departments than his acting. Anupriya impresses with her expressions. Posani has surmounted Manoj in many scenes. Posani keeps the humor alive in the plot which appears to be predictable. Simran and Rachel are middling in their cameos.  Sakshi Chowdary has done a neat job, but her characterization boring. Ali is average as a Dr. Samarame.

The director has entwined two different life stories with 5 love stories into one, but the shaping is not successful. The first half of the film is decently paced, with okay entertainment scenes. But the second half is slow, dull and dragging, a nearly complete contrasts to the first half. A major drawback of the film is that the post-interval is majorly unconvincing. At times, the audience tends to forget the first half of Potugadu. The second half is more like a semi documentary film with a minor connection to the first half. It is all the more disappointing when this connection is revealed in the climax.
Music by Achu Rajamani and Chakri is an asset. All the songs are scored and rendered properly. The background music is also fine. Cinematography by Srikanth is neat. He shots in Bujji Pilla and Pyaar Mein Padipoya are good. Fights are too lengthy. Editing by M R Varmaa is slack. The return of Ramalakshmi Cine Creations after 2 long years is good with grand Production Values.
The much awaited movie of the year Potugadu is out, but does not live up to its expectations with director Pawan trying too many love stories in a single plot. The movie has the typical ingredients of commercial film – romance, songs and lovely locations. Unfortunately, the film offers nothing new. Like regular water tastes mineral water in a desert similarly in a season of flops it might appeal to few audiences.
What Is Good: Cinematography, Songs and decent first half entertainment
What Is Bad:  Feelings in the Love stories were missing, dragged Narration, Lengthy Fights, Unconvincing Climax and Forced quotes
Survi Review: 2/5