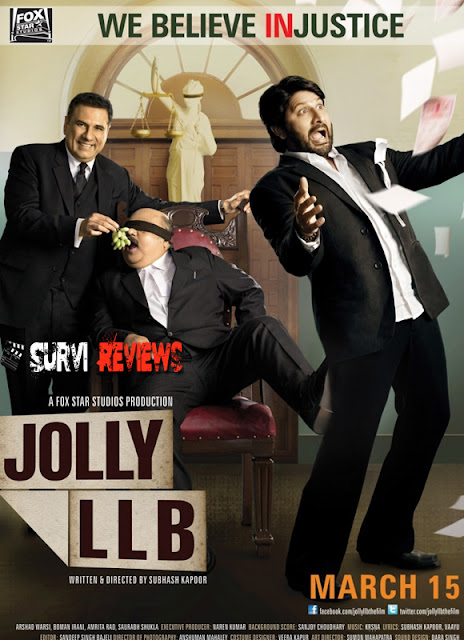 Story: The story is about a small time lawyer Jolly (Arshad Warsi) in Meerut who decides to come to Delhi to better his career. Once he comes to the big city, he finds ladder to his success and glory by deciding to fight against a big lawyer (Boman irani) in a hit and run case. In the process of finding success, he realizes that there is more to success and money and that is fighting for the truth and helping the victims.
Performances: Arshad Warsi though not at his best gives another solid funny performance (not Munnabhai-type but still pretty funny). Supporting cast are decent, Boman Irani as usual is very good, Amrita Rao is lovely in her small role, Saurabh shukla as judge performed over the edge and in few scenes, was the show stealer. The casting head must appreciated for selecting the perfect choice of actors.
Technicalities: Director Subhash Kapoor is back with his sarcastic way of telling the story, same as his last movie Phas gaya re Obama. Inspired by the Sanjeev Nanda’s hit-and-run case, Subhash Kapoor’s latest venture has its heart in the right place but lacks consistency. Jolly LLB’s screenplay is predictable, with lavish melodrama but what the story lacks in terms of surprise, the cast makes up with its performances.
Subhash Kapoor must appreciated for some satiric scenes:  A scene where a corrupt cop (Sanjay Mishra) openly auctions off a promotion in the police department to the highest bidder amongst a fleet of dishonorable officers though extremely funny was unnecessary or way too long. The aged spindly bodyguard assigned to Jolly brings up in the hour of need bringing a lump to your throat. Argument scene in-between Boman & Arshad Warsi. Sessions court judge Saurabh Shukla’s scene in the pre climax.
Music disappoints and there was no such need of the song sequences. Dialogues by Subhash Kapoor are good. Editing could have been crispier in the starting scenes.
Survi Verdict: Jolly LLB is funny, very slow in parts of the middle but makes up again by being odd, hilarious down the stretch. It’s a funny little movie, not memorable or classic but worth a watch for performances, good intended story line and for promising second half.
Survi Review: 2.5/5
Theatrical Trailer: