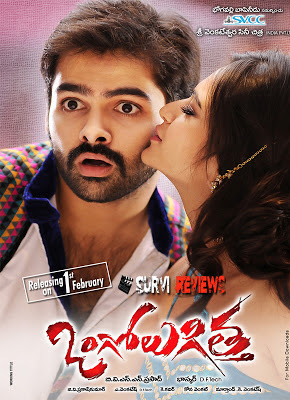 Cast: Ram Pothineni, Kriti Kharbanda, Ajay, Prakash Raj, Ahuti Prasad, Raghu Babu, Abhimanyu Singh, Kishore Das and Rama Prabha
Genre: Action – Romance
Censor Certificate: A
Director: Bhaskar
Producer: B V N S Prasad
Watched at Prasadz, Hyderabad
Bhaskar who got good recognition as a director with ‘Bommarillu’ and ‘Parugu’ faced a serious setback with ‘Orange’ he made with Mega family hero Ram Charan. He also faced severe criticism from the film Pundits. He struggled for a long time for getting a chance. Finally he got the opportunity to make ‘Ongole Gitta’ with Ram. As Ram’s earlier film ‘Endukante Premanta’ was a flop, he also pinned all his hopes on this film. There are high expectations on the film in which Kruti Karbanda played the female lead role. Let’s check out the review…
A boy “White” enters into Ongole Mirchi Yard on a mission. Mirchi Yard Chairman Aadikeshavulu (Prakashraj) is a responsible man who is respected by the business community. As time goes on White grows into eneregtic youngster (Ram) with his eye set on acquiring the Chairman post. In the process, local MLA (Ahuti Prasad) strikes a deal with Aadikeshavulu to shift the Yard to outskirts of the town for their personal benefit. Meanwhile, White gets engaged to Aadikeshavulu’s daughter Sandhya (Kriti) against the wish of Aadikeshavulu. Will Adhikeshavulu leave White for trying to replace his chairman post? Will Sandya accept White? Who is Bangarraju (Prabhu)? How White takes the revenge on Aadikeshavulu forms rest of the storyline.
Performance by Ram is good; His energy levels are increasing with every film. But sadly, his judgment and decision making skills are becoming poorer. Kriti Kharbanda is good with her performance, but she looked a bit matured than Ram in this film. Chemistry between the lead pair is very unreal. Prakash Raj histrionics are excellent in this film, but the Characterization of the role is not convincing. His nude scenes are irritating; director could have made him sleep by removing his make up (By bathing n changing his regular clothes). Ramaprabha, Kishore Das, Ali and Raghu Babu are decent with their performances. Prabhu is fine as an affectionate father.
Story of the movie is little predictable. The script of this film has potential. But the director handled the subject amateurishly. Screenplay of the film is not up to the mark. Director did not put any lead scenes that built tempo for mass scenes in this film. Music by GV Prakash should have been better. BGM & Rerecording by Mani Sharma is alright. Cinematography is okay. Dialogues are regular. Editing could have been crispier. Productions values by Sri Venkateswara Cine Chitra are good.
First half of the film is boring. So is the second half. The quality of Bhasker’s work is going down from film to film. The major drawback of the film is half-baked script that never really keeps you glued on to the narrative; this film ends up being an amateurish to a certain extent. On a whole, This one is for the fans of Ram.