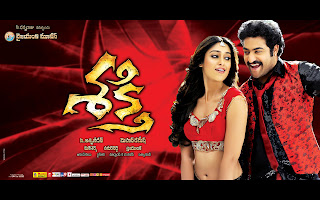 Movie starts off with backdrop of Egypt with a person bringing Sonu Sood’s head and handing it to Sonu’s wife Puja Bedi. In order to demolish India and take Shakti Peetham’s in control which is Sonu’s aim, Puja Bedi trains her elder son as a cruel man. Aishwarya (Ileana), who is the daughter of Central home minister (Prabhu) escapes to Jaipur for a trip with her friends. Prabhu safeguards the Black diamond which was given by Nazar, later he leaves to foreign in search of a gangster (Jackie Shroff) for asking him the Rudrashulam, which the latter denies. Unknowingly, Ileana carries the black diamond in her bag and Puja Bedi’s men tries to attack her for the sake of grabbing the diamond from Prabhu. In this regard Shakti (NTR), who is a guide, saves her from the goons and Ileana falls for him. Here comes a twist, where NTR discloses that he is an NSG Commando secret agent. What is the story behind the black diamond and Rudrashulam? How does Shakti safeguards the Maha shaktipeethams and kills the demons? Is the crux of the story.

Well, if I want to talk about the performances of the artists, a single man deserves all the applaud and praises, Jr.NTR. It seems as if he decided to get into the skin of the character. Ileana justified her role but could have been better. She followed exactly what director persuaded her to do. Nassar is one who’s away from his desk this time, and he does well. Pooja Bedi fits in her role. Sonu Sood looks like a proper Egyptian and he gave a satisfactory performance. Other artists like Ali, Prabu, Vinod Kumar did a good job. Bhramanandam and Jakie Shroff were wasted. Songs by Mani Sharma are good but the background score failed to lift the momentum in Second half. Cinematography by Sameer Reddy is the biggest asset for the film. Direction & Screenplay by Meher Ramesh cannot be applauded as the treatment given to the movie is not satisfactory. Production values were high standards. Dialogues by Satyanand are unimpressive.

First half of the film is OK. Interval bang is interesting. The second half is dull. The flashback episode – that is supposed to justify the title of film – could not evoke the right emotion. NTR disappoints with wrong choice of subject for ‘Shakti’. Skip It in theatres…